An Unwelcome Visitor: Living with a Coalmine

I grew up on a small farm which had been planted as an orchard in the 1960's. We farmed the orchard and the surrounding native bushland was left to nature. We occasionally drew water from the Cataract River at the back of the property when our tanks ran dry. It was a clear running creek at the bottom of a deep gorge...water never tasted this good.

After some years, BHP (then Australian Iron and Steel) established a long wall coal mine on the large property across the road. This was not an entirely welcome development locally, although St Mary's Towers, a monastery owned by the Catholic church, did derive a benefit from the sale of land for the mine and royalties on coal for a period. We did not know then what we know now. There were other mines in the district in Appin and other locations in the Sydney water catchment area between Picton and Wollongong. BHP were careful (required to?) to minimise destruction to the surrounding bushland. In the beginning, it was hard to notice a mine existed because it was hidden behind such dense native forest. We did miss being able to walk or ride on horseback through the bush, and we were no longer able to access the beautiful cave on Allens Creek, a testament to the wonderful art and culture of the Dharawal people of the district.

The mine took several years to establish, by which time our family was ready to move on, but not before coal extraction began and the trucks started rolling in and out. This was the first visible sign of pollution as at this time the waterways were still pristine, animals and birds were still seen in great numbers and there was very little noise or visual pollution.

Within a year, the roadways were black with coal dust as a steady stream of trucks filed in and out of the mine to travel the 40km trip through water catchment country to Port Kembla coal loader. The trees and rocks were black, the roadside was filthy and dead animals lined the road every morning, although this decreased in time as one could imagine the area became less habitable for native fauna. The noise increased as production became a round the clock operation, and the lights and noise at night made it difficult for residents. It only ceased when the miners went on strike. When my parents decided to pack up and go, they sold the farm to BHP, nobody else wanted to buy it.

What has happened in the subsequent 35 years of the mine’s operation is a sad tale of environmental destruction. Mine subsidence in the area damages roads and houses. It makes the surrounding river gorges unsafe due to regular rock falls. Wildlife is no longer abundant as it once was, despite little residential development.  The road trees along the road are stunted and black, the soil by the roadside is tainted with black coal dust. It has devastated the local river system. Ventilation shafts, including those still being built pump methane and other gases into the atmosphere and underground the mineshafts cover many kilometres.

It is the Cataract River which flows through a deep sandstone gorge and is part of the Sydney water catchment, which formed the boundary of our family farm. In the mid 1990’s, CSG, released as a result of cracks caused by mine subsidence, devastated the river with deadly effect on ALL  riparian vegetation and aquatic life. The beautiful river, where we used to swim and our neighbours would fish, became a graveyard of dead trees and shrubs. This has been well documented, and a straightforward article by Rivers SOS documents some of the damage.

Cracks from mine subsidence not only fractured the river bed causing the creek to drain, it also allowed significant amounts of high molecular weight gas components (C2+ >2.3%), including C6-C8 n-alkanes, branched alkanes, alkylcyclopentanes and alkylcyclohexanes to escape. The result of this was that the soil became anoxic, as the methane replaced oxygen in the soil. Gases escaping at a rate of more than 20l/s led to soil temperatures of over 40 degrees.  Vegetation was killed by both increased temperature and oxidation of methane gas and its homologues in the soil. The carbon isotope signature of the methane was similar to that found in CSG. Added to this destructive situation was an upstream dam which restricted the natural river flow. In fact the whole Georges River system has suffered the same fate from mining, and restrictions now prevent mining under rivers in this area. This is just my first hand experience of localized damage.

At a global level, coal as a cheap form of energy fuels electricity plants and drives industry. At every step from mining, transport and its use burning to produce energy, coal causes local and global environmental damage and is a huge contributer to general air pollution and greenhouse gas emmisions.

As a result of this personal experience, I am very opposed to Coal Seam Gas Extraction and Coal Mining. Especially as we have alternative energy sources and we know the damage caused. We can't pretend a coal mine is not a disaster for any district. They are dirty, noisy, polluting, they look awful, they don't benefit the district (other than throwing money at community organizations..peanuts) and at the end of the day, it is such a short term exercise; most of these coal mines are now closing down. They took the money and ran....... very dodgy houseguests indeed. 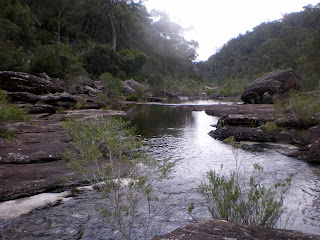 I've been an irregular visitor to my own blog, just popping in to redirect mail.

You can now find me here: Digital Education or here: Angela Towndrow

After a wonderful MOOCing adventure in edcMOOC in 2013, I became an eager participant in lots of other moocs, a way to expediate my self education in online learning. In late 2013, I was invited to join the second run of edcMOOC as a community teaching assistant (CTA) with 7 other previous edcMOOCers. Perhaps I will post about that experience later.

However, that prompted me to enroll in the University of Edinburgh Digital Education MSc, and my journey in that course is well underway. Great program, bits of which I am sharing on my new blog Digital Education. Do drop by, say hi, challenge my arguments, or agree with me!

Ary, Maddie, Emily and I had a fun publishing adventure following edcMOOC:

Quadblogging: Promoting Peer to Peer Learning in a MOOC
http://openeducationeuropa.eu/en/article/Quad-blogging:-Promoting-Peer-to--Peer-Learning-in-a-MOOC

Realising the Potential of Peer to Peer Learning: Taming a MOOC with Social Media
http://openeducationeuropa.eu/en/article/Realising-the-Potential-of-Peer-to-Peer-Learning%3A-Taming-a-MOOC-with-Social-Media

Wondering what to do with your coursera certificates? Teatowels? 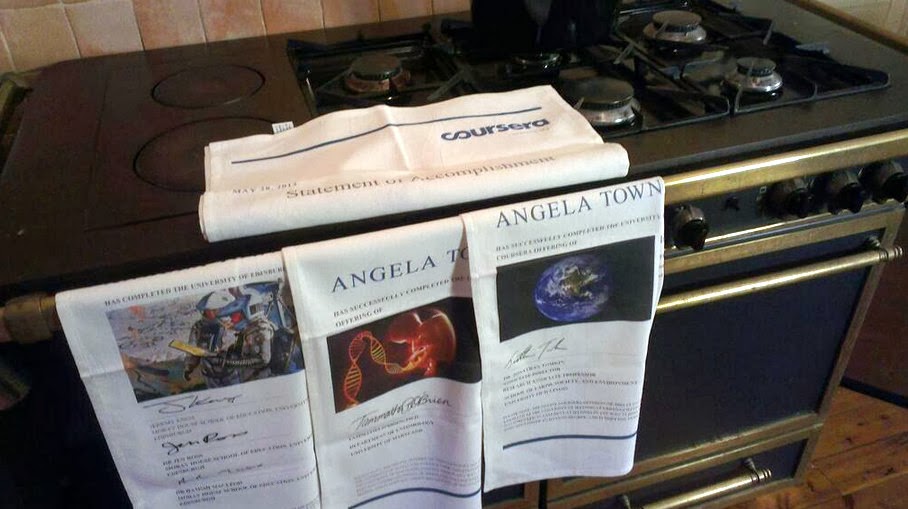 This is a call to all edcMOOC bloggers! We have a short survey and we'd love you to take it. We're also interested to hear the experience of those who quadblogged as well, so if you are a "quaddie" please fill it out. 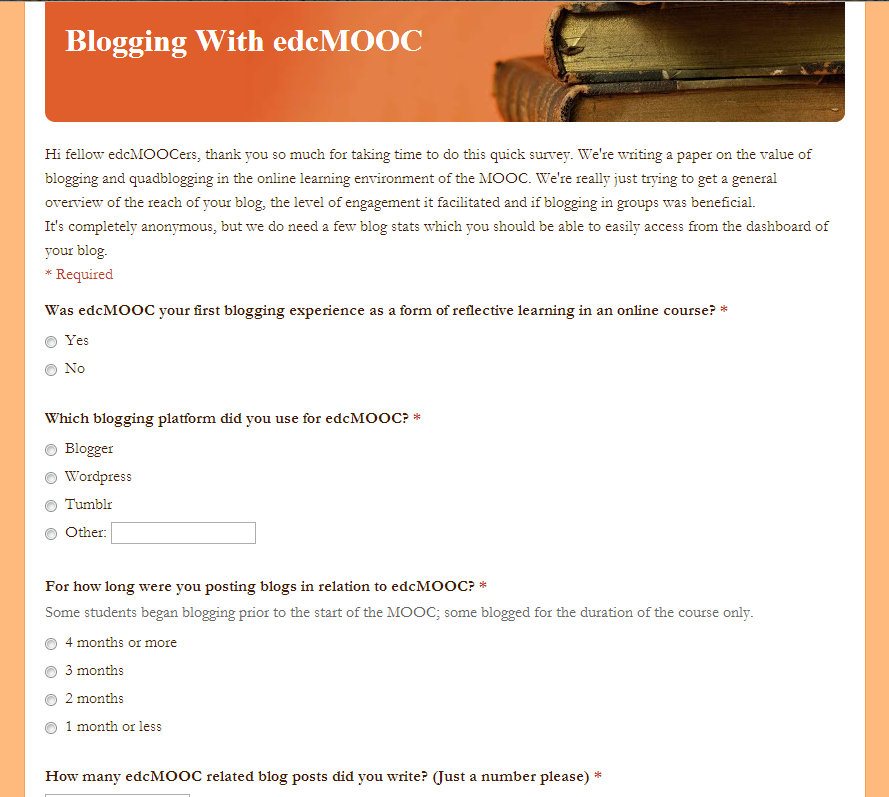 My artefact for edcmooc is a thinglink 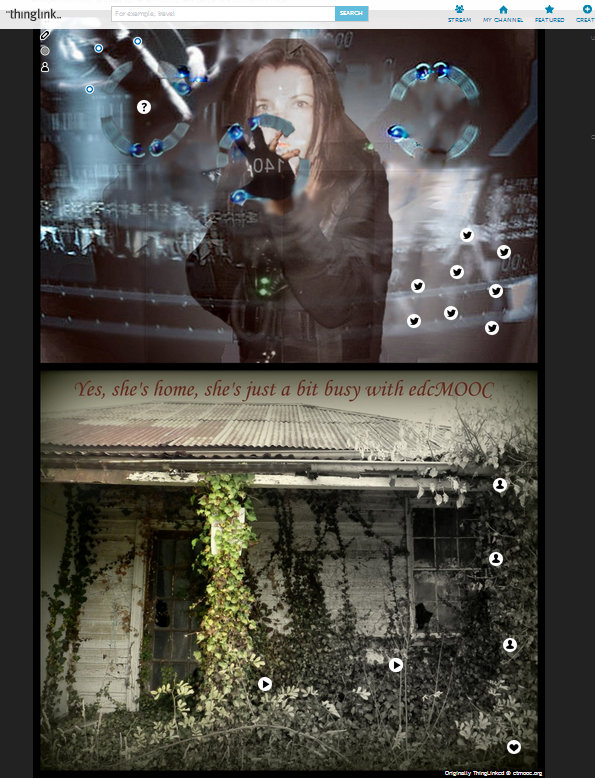 Stuff from all over the place: #edcMOOC Artefacts

My intro video for etMOOC

#edcmchat Survey by angelatowndrow on GoAnimate

Spimal tap: harnessing blogjects of the future to save the world! #edcmooc

Much as "spime" and "blogject" sound like pretty out there notions, I think it is more a matter of application of technology to some already established concepts where objects transmit data in real time via social media or other platforms where data is broadcast to a wider audience, sometimes in another digital form. Some of us created a list of blogjects to add to the smogged out choking pigeons. We found tweeting plants, texting and tweeting house plants, tweeting flies, tweeting birds.

I'm fascinated by the idea of blogjects. I can think of some really apocalyptic visions where blogjects sing about our demise as it happens. (I don't think the world will come quite to this)

One really interesting project is "Time and Tide Bells" a permanent installation of 12 bells positioned at strategic locations around the UK, from urban centres to open stretches of coastline. "The rise of the water at high tide moves the clapper to strike the bell. Played by the movement of the waves, the bell creates a varying, gentle, musical pattern. As the effect of global warming increases and sea levels rise, the periods of bell strikes will become more and more frequent, and as the bell becomes submerged in the rising water the pitch will vary." 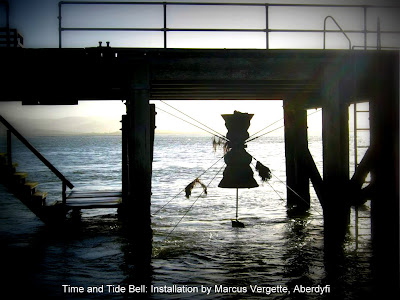 One of the bells is in Aberdyfi, Wales. This is partly to commemorate the legend of the Bells of Aberdyfi which tells of the submerged kingdom of Cantre'r Gwaelod. It is said that the bells of this lost kingdom can sometimes be heard ringing from beneath the estuary waters on still nights.

This is where art, science, mythology and environmentalism intersect. I think the bells would make great blogjects. I can think of some interesting ways the music could be broadcast online by the bells themselves, they could tweet and I'm sure they could post images and mp3 files to their own facebook site.

edcMOOC is really reinforcing the idea that technology must serve a useful purpose in all aspects of life, especially education. For me, it's about the getting of wisdom and using the tools to that end.

A Day Made of Glass is a horrific vision for the future in my opinion. Corning's dystopic fantasy puts us in a glass prison, for profit. Screened off and distanced from real world experiences and genuine issues like biodiversity loss, deforestation, resource depletion and climate change, the take home message is WOW!

"Saving the Rainforest" was a slideshow I made for my friend Denis who is a passionate lover of nature and a dedicated wildlife warrior. When my little boy saw a movie about orangutans, he was obsessed with swinging on a monkey vine in a rainforest and when I asked Denis where one could be found, he directed us to the 5 acre remnant rainforest in Robertson NSW. It was the only patch of the huge rainforest not cut down by  European settlers in the early days of British colonisation of Australia. We found our vines, and with strict instructions from Denis to be very careful with them, we returned with best buddy George and the two boys spent hours swinging like monkeys. After our visits, Jonny, with no prompting by me, wrote a story about saving the trees and animals of the rainforest from woodcutters. WOW!

In my developing notion of digital storytelling, here are my tales of two forests, four children. 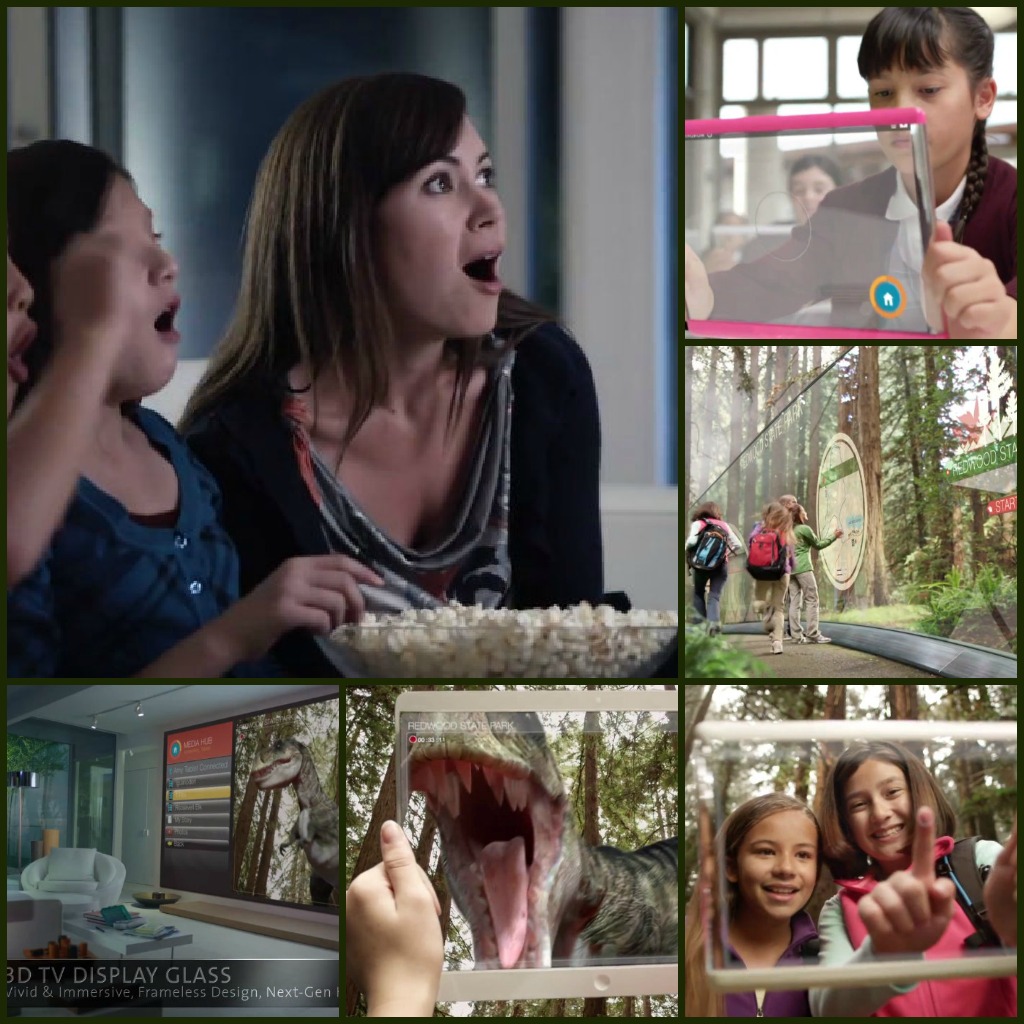 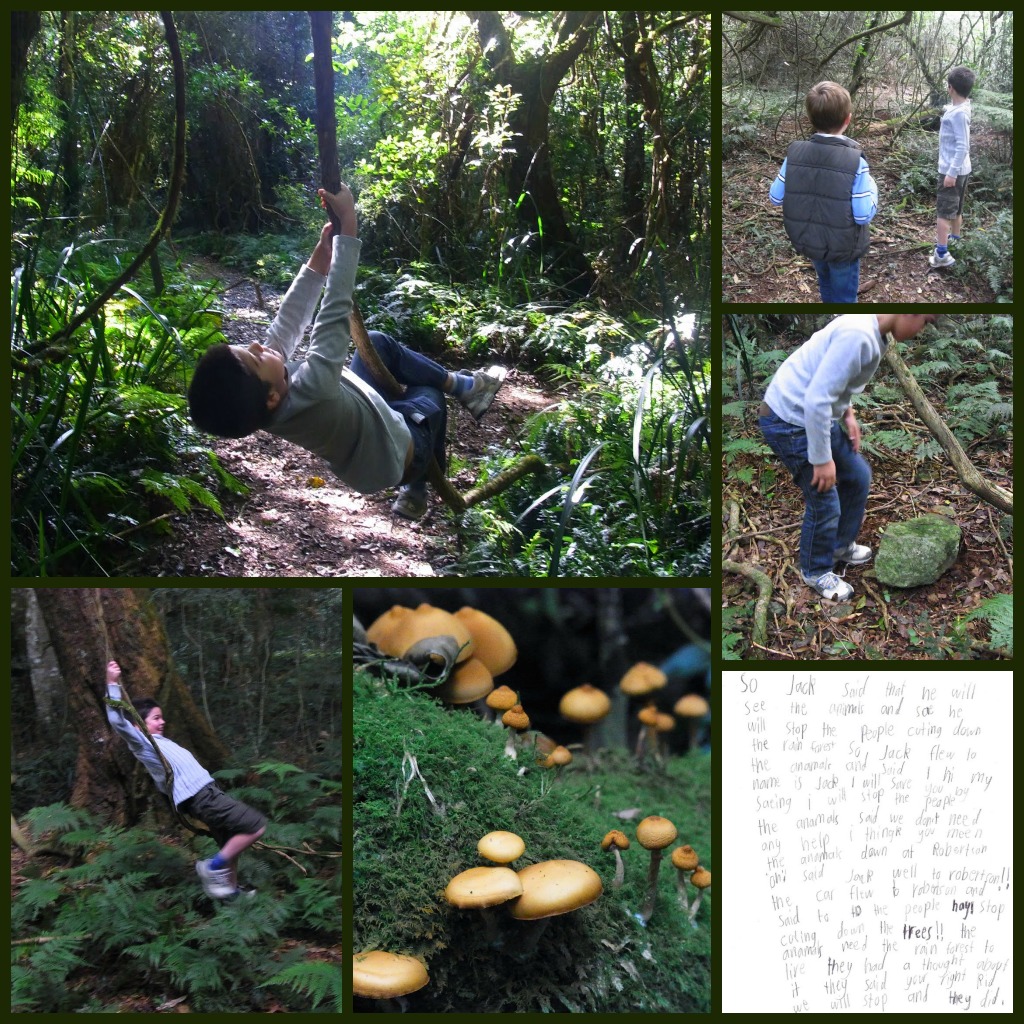 This was my original version for Denis who says that in all his years as an environmental activist, this was his greatest achievement. It is my favourite digital story: the photos were taken on the many trips we have made to the forest. And I love the music.

And Corning's promo, for the record.

Thanks Denis, we need mentors.